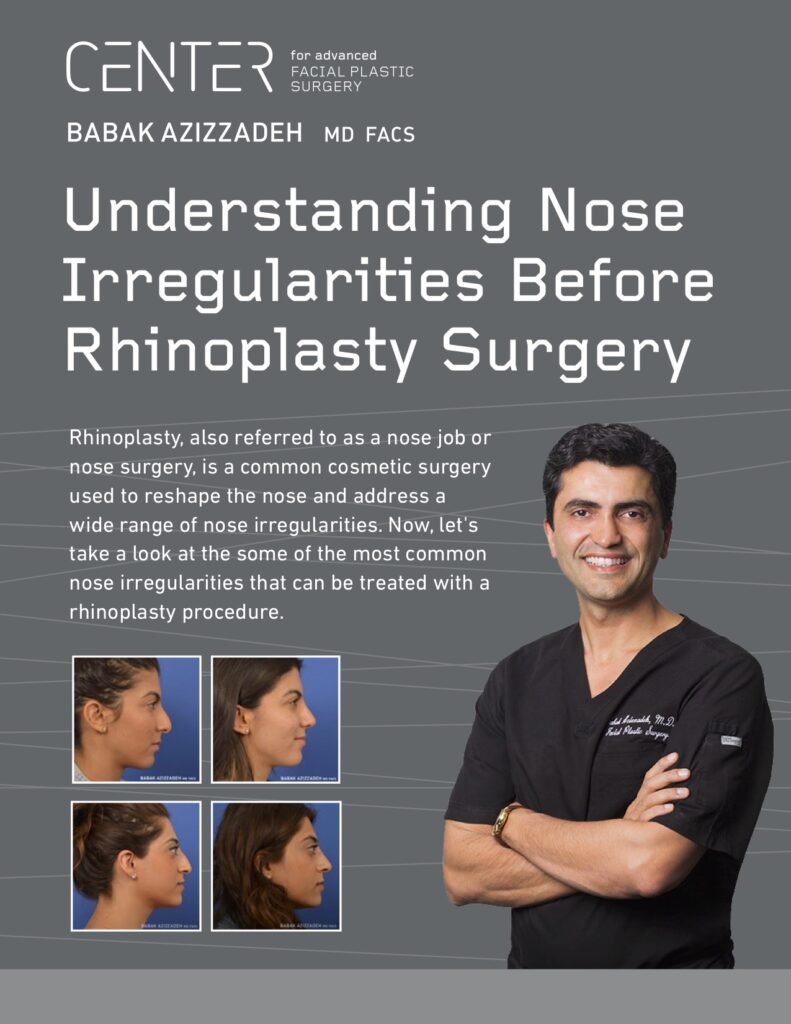 Rhinoplasty, also referred to as a nose job or nose surgery, is a common cosmetic surgery used to reshape the nose and address a wide range of nose irregularities. Now, let’s take a look at the some of the most common nose irregularities that can be treated with a rhinoplasty procedure.

Nasal Anatomy: Knowing The Parts of Your Nose Prior To Rhinoplasty

Nasal Analysis Prior to Rhinoplasty

Nasal analysis refers to the period when a rhinoplasty patient and facial plastic and reconstructive surgeon meet to discuss the procedure. At this point, both the patient and Dr. Babak Azizzadeh can learn from one another, determine the best course of action and establish realistic outcomes for treatment.

As part of nasal analysis, Dr. Azizzadeh first analyzes a patient’s history. He or she reviews a patient’s health history, family history, medications, prior hospitalizations and information about any previous surgeries.

A physical examination is a requirement as part of nasal analysis, too. The examination begins with an assessment of the thickness of the skin on the patient’s nose and the nose’s soft tissue envelope. Furthermore, examination of the nasal septum involves both external and internal assessment. Intranasal examination with a headlight and nasal speculum may be used to assess the integrity of the patient’s septum and the degree of septal deflection.

Photographic documentation also is an important part of nasal analysis. The use of photographs helps with surgical planning, counseling, patient self-assessment and documentation for insurance and medical reasons.

Digital photographs enable rhinoplasty surgeons and rhinoplasty patients to view the patient’s nose together. The patient can use the photographs to identify undesirable nasal features and point them out to Dr. Azizzadeh.

Imaging tools often are used to help the patient visualize his or her facial appearance after rhinoplasty surgery. The tools allow Dr. Azizzadeh to take a patient photograph and modify the image to show the patient what he or she will look like following surgery. Thus, imaging helps the Dr. Azizzadeh and patient determine which nasal irregularities to correct during a nose job.

The ultimate goal of nasal analysis is to help a rhinoplasty surgeon understand what a rhinoplasty patient wants to get out of surgery. Nasal analysis enables Dr. Azizzadeh to assess a patient’s nose, as well as his or her eyes, cheeks, chin and other facial features.

A functional nasal abnormality causes nasal blockage, noisy breathing or snoring, decreased smell or taste, nosebleeds and/or recurrent sinusitis (inflammation of the nasal passages). Here are some of the most common types of functional nasal deformities.

A cosmetic abnormality of the nose impacts the look of the nose, but it does not affect the nose’s overall functionality. Here are some of the most prevalent cosmetic nasal abnormalities.

The columella is a column of tissue that sits between the two nostril openings. Here’s a closer look at some of the most common columella defects.

Nose Abnormalities and How To Correct Them

Here are some of the most common nose abnormalities, along with procedures designed to correct these issues.

Closed reduction is one option to treat an acute nasal fracture. This involves the use of a Boies nasal elevator to restore the nasal length. To repair a septal fracture, Asch forceps or a Boies elevator may be used as well.

An asymmetric nose is used to describe all conditions that cause a deviation of the nasal pyramid from the median line. It may be genetically inherited or the result of traumatic injury to the nasal bone or cartilage. In some instances, an asymmetric nose may develop following a prior nose procedure.

An asymmetric nose appears crooked. The nasal tip is caved in, and the nasal septum also may be affected.

Surgery is commonly used to address an asymmetric nose. With surgery, an individual can correct a crooked nose or repair one side of the nose.

A bulbous tip occurs when the nasal tip is too round or too wide. It may occur due to poorly defined hypertrophic lower lateral cartilages, a round dome shape, heavy soft-tissue coverage or limited cartilage strength.

Bulbous tip rhinoplasty enables an individual to refine and reconfigure the small cartilage edges on the nasal tip. It involves the use of various suturing techniques, resulting in a natural-looking nasal tip.

A dorsal hump refers to an unwanted bump on the nasal bridge. It may be unnoticeable from a frontal view. However, some individuals want to have a dorsal hump removed for a straighter, smoother bridge as seen from a lateral perspective.

A hanging columella refers to a condition that affects the bridge of tissue that separates the nostrils at the nasal base. It occurs when the more than 4 mm of the nostril is visible as soon from a profile view. Meanwhile, a hanging columella may occur due to genetics or an overly long septum that pushes the columella downward.

There are many different types of nose procedures. These include:

For those who want to correct nose irregularities, rhinoplasty surgery may prove to be a viable option. Rhinoplasty is safe and effective, and to date, has helped many people correct nasal irregularities.

Dr. Babak Azizzadeh of the CENTER for Advanced Facial Plastic Surgery in Beverly Hills is a globally recognized facial plastic and reconstructive surgeon. He possesses dual certification in head and neck surgery and facial and plastic reconstructive surgery, and his unique expertise helps him effectively treat nose irregularities. To find out more, please contact the CENTER today at 310-657-2203 to schedule a rhinoplasty consultation with Dr. Azizzadeh.

Join us for a day of beauty on June 16! Find Out More